Of course, I have some concerns with not using SSL by Thunderbird when it looks for the configuration. Here I have found a final (?) conclusion about using SSL:
But I cannot agree with that, because intercepting emails is not the only target for the possible attack.

I've made an experiment, and create a network with a specially prepared DNS server, which redirects autoconfig.gmail.com and gmail,com to a local http server, with an autoconfig file that provides addresses to the wrong imap and smtp servers. Thus, when client tries to configure an account and just clicks "Continue" and "Done" without looking at the IMAP server address, an attacker can intercept his password if provide him with the server address for which he has an SSL certificate. 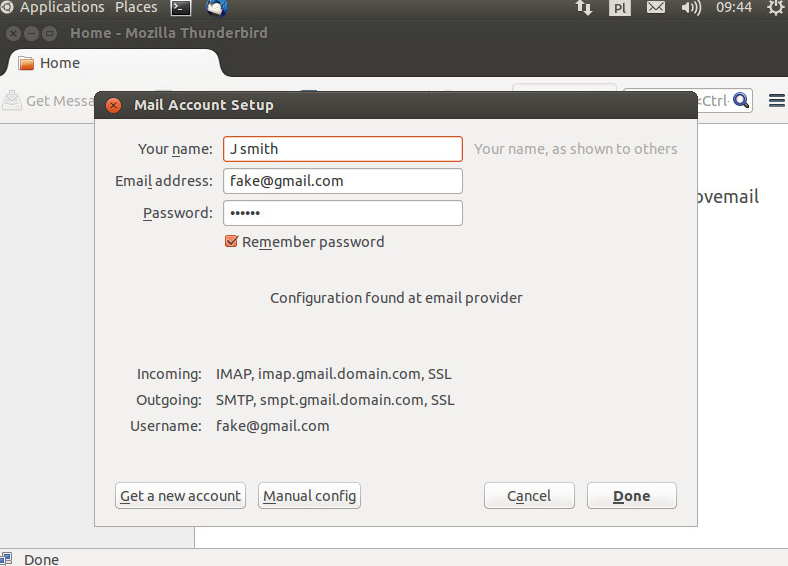 Good news: it's not so easy to use some pretty-looking addresses like the one on the screenshot. Because you need to have a trusted SSL certificate for this name. And if not use SSL in provided IMAP/SMTP configuration, Thunderbird will warn you with a big red window.

However, the attacker can use any server name if he has any stolen server certificate, and user can just don't pay appropriate attention to the values in the configuration.

Of course, the configuration above is very simplified. Final configuration can be more intelligent and should allow user to browse Internet and use other services normally, so user will be sure that the only problem is a mail client.

Some users tend to re-configure from scratch their applications if something won't work. Of course, make this setup for collecting the Thunderbird users password only is not effective, but this could be a part of an attacker tools-set aimed to collects the data on public networks.